I first met Hildegaart in 1994. I was at the start of research that became a PhD called ‘People, Plants and Practice in Drylands’. Through this work I began to learn something of the lives of Damara / ≠Nūkhoen and ||Ubun people living north and south of the vet fence or ‘Red Line’ that cuts an administrative border from west to east across the country.

At that time, Hildegaart and her late husband Manasse ||Gam-o |Nuab were gardening and herding some goats in the settlement of Sesfontein. But Hildegaart lived her first years with her parents at places where plants of the !nara melon (Acanthosicyos horridus) grow in the dunes of the !Uniab and Hoanib Rivers, close to the Atlantic Ocean in what is now the Skeleton Coast National Park.

In the Hoanib, the places where Hildegaart's parents stayed were called ||Hoas and !Ui-||gams, near Auses waterhole. Here, each family had their own !nara plants from which to harvest. This is why they were known as '!narab Dama'. They were Damara / ≠Nūkhoen people who knew how to harvest and prepare !nara.

In the video below Hildegaart remembers how when she was little at the Hoanib !nara fields her parents would harvest the !nara fruit. When the !naras were yellow in colour they would test them for ripeness with a long stick that could reach into the spreading and spikey !nara bushes. They would put the ripe !naras into a big container, then cook and stir them to make the pulp of the fruit become like liquid.

That juice they poured into another tin with holes in the bottom to separate it from the seeds, and then they threw the juice onto the dunes to dry. When the edges of the dried juice could be picked up off the dunes, they would roll it up and eat this rolled cake of !nara juice.

They would also spread the seeds out on an animal skin, and when they became dry they would eat those seeds. Sometimes they would pound them before eating.

Then Nama headmen from Sesfontein came to them and said, 'you cannot stay here alone, you have to move to Sesfontein so that the government can recognise you'. When they came to Sesfontein, the Nama leadership gave them gardens so they could start planting food. They began wearing European-style clothes instead of the skins of springbok they had worn when ‘in the field’. But Hildegaart's parents continued to go to the !naras at the time of the year when they became ripe. They would move down the Hoanib and bring !nara cakes back to Sesfontein.

Later, Hildegaart's father became a herder of goats belonging to Husa – the Nama captain of Sesfontein who died in 1941 after being mauled by a lion at the pass known as ≠Au-doas south-west of Sesfontein. At this time, they stayed at places along the Hoanib that are closer to Sesfontein than the !nara fields, such as |Aub, Dubis and |Garib. Sometimes Husa would kill a zebra for them so that they had meat to eat.

Eventually Hildegaart’s parents moved more fully to Sesfontein, where they could plant maize, wheat and tobacco. After 1950 it became harder to access the !nara plants because the northern coastal dunes became a restricted area controlled by Consolidated Diamond Mines Ltd of South West Africa. 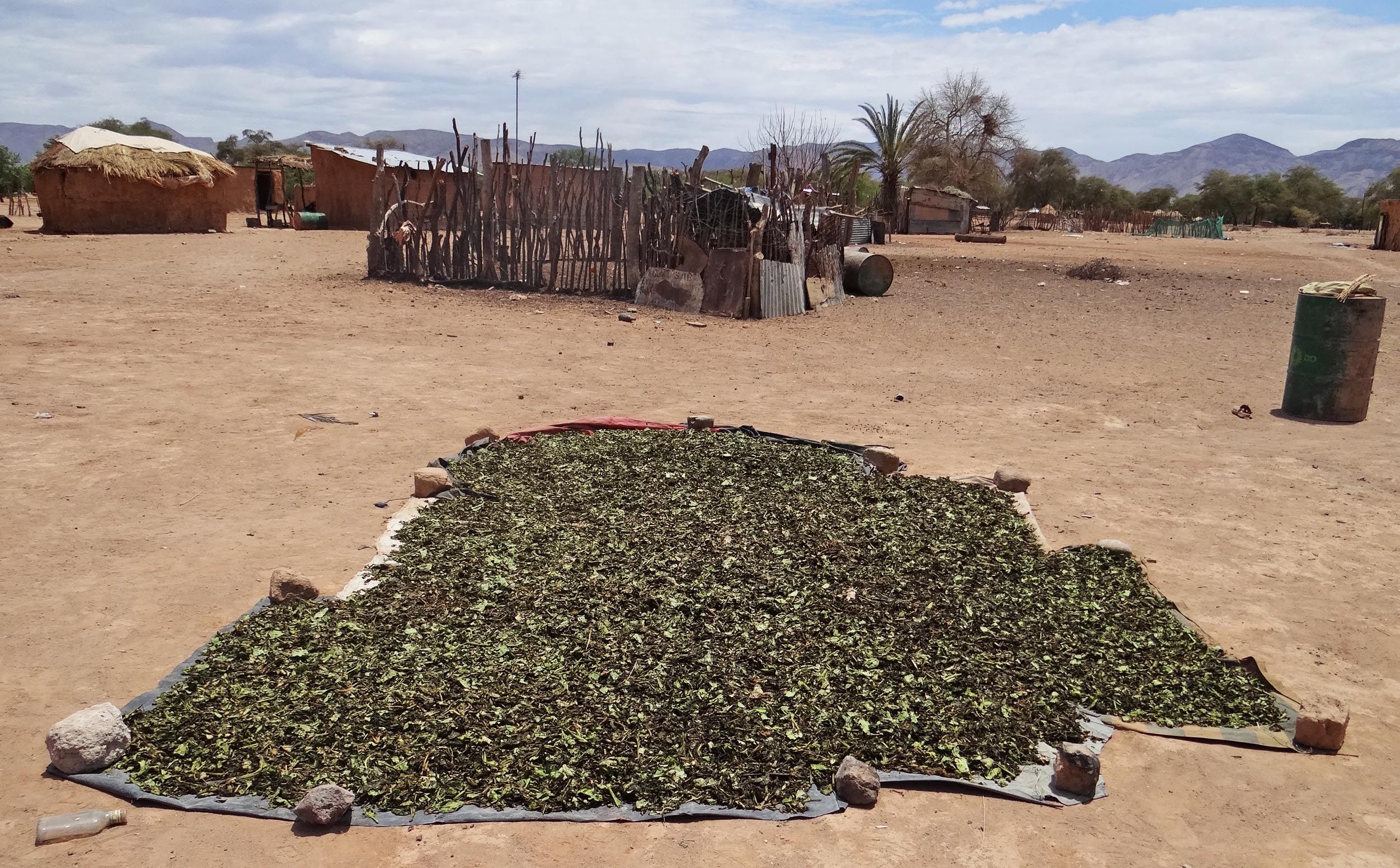 Top - Hildegaart holds !nora or plaits of tobacco grown in the gardens in Sesfontein (1995). Bottom - ≠khari ≠gaeb or 'small tobacco', laid out to dry in front of Hildegaart's home, 25 November 2014.

Hildegaart met her husband Manasse ||Gam-o |Nuab in Sesfontein / !Nani-|aus. They were both people who collected field foods – !garob ≠ūn – and Manasse also harvested honey. In 1996 we filmed him harvesting honey – danib – from his hive in schist hills to the south of Sesfontein / !Nani-|aus (see the first six minutes of this film). Manasse continued to go to the !nara fields of the Hoanib and to bring bags of !nara on a donkey back to Sesfontein.

Manasse was a flautist who played the flute songs brought to Sesfontein by !Gomen Topnaar and Swartbooi Nama when they migrated away from conflict further south in the late 1800s. Sesfontein appears to have been the last place where this music was played, as Nama peoples retreating from the ravages of the expanding Cape Colony eventually established themselves in the north-west of the territory that became Namibia. This music was first described by Europeans as long ago as 1497, when Portuguese explorer Vasco da Gama heard it at Mossel Bay in South Africa. The journal of this voyage describes him and his crew dancing with the people they found there, on the historic journey establishing a sea passage from Europe to India that later enabled the lucrative enterprise of the various colonial East India Companies.

One of Hildegaart’s favourite |gais or praise songs is about the Hoanib River where she grew up. It tells of how six women were collecting foods like sâu, bosû and ûias[1] and they became trapped on the other side of the river from their homes. They started singing to ask that they change into the birds that are called Kao, so that they can fly over the river back home. Kao birds (perhaps Egyptian geese?) are also seen to fly in sixes. This is a story that her grandparents told her.

Hildegaart is singing a variation of these words:

The Hoanib water is flowing there

We want to be a rain bird

We want to be a kao bird

The Hoanib water stings me when I drink it

The big river is flowing

In May 2019 Hildegaart was the oldest member of a journey facilitated by the Future Pasts project to take members of Sesfontein's Hoanib Cultural Group to the former dwelling site of Kai-as in today's Palmwag Tourism Concession. This is a place where senior Damara / ≠Nūkhoen and ||Ubun people now living in Sesfontein remember meeting and playing their |gais praise songs and arus healing dances.

We are currently making a film documenting this first 'Kai-as Festival'. For the celebration of Hildegaart's 90th year, we share below some images and sounds that give a taste of the strong spirit she brought to our journey.

Kai aios, thank you, Hildegaart, for all you have shared over the years.

Note This post draws on multiple interactions with Hildegaart and especially two sets of oral histories recorded with Hildegaart on 6 April 2014 and with Hildegaart and her late husband Manasse on 11 May 1999. All interview material has been transcribed and translated by Welhemina Suro Ganuses, and we have worked together to clarify translations and interpretations. We are now working with the leadership of the Namidaman Traditional Authority, the Sesfontein Conservancy and Save the Rhino Trust to establish the Future Pasts Trust whose mission is

If you would like to receive occasional updates about the work of this emerging Trust please email futurepastscontact @ gmail.com, or subscribe here.

All images and film sequences are by Sian Sullivan, unless otherwise stated.

Film sequences are set for mobile devices (i.e. low res) so they can be viewed in Sesfontein.

[1] Sâu, bosû and ûias are the names of important food plants - respectively the seeds of Stipagrostis species grasses and Monsonia plants of the geranium family which can be gathered from the nests of harvesters (see second section of this blog), and edible corms that are abundant after rains.